The complex interaction of emotional and physiological problems in eating disorders (such as anorexia nervosa, bulimia nervosa, and binge eating disorder) calls for a comprehensive treatment plan, involving a variety of experts and approaches. Ideally, the treatment team includes an internist, a nutritionist, an individual psychotherapist, and a psychopharmacologist – someone who is knowledgeable about psychoactive medications useful in treating these disorders.

To help those with eating disorders deal with their illness and underlying emotional issues, some form of psychotherapy is usually needed. A psychiatrist, psychologist, or other mental health professional meets with the patient individually and provides ongoing emotional support, while the patient begins to understand and cope with the illness. Group therapy, in which people share their experiences with others who have similar problems, has been especially effective for individuals with bulimia.

Use of individual psychotherapy, family therapy, and cognitive-behavioral therapy – a form of psychotherapy that teaches patients how to change abnormal thoughts and behavior – is often the most productive. Cognitive-behavior therapists focus on changing eating behaviors usually by rewarding or modeling wanted behavior. These therapists also help patients work to change the distorted and rigid thinking patterns associated with eating disorders.

For more information or to make an appointment to see a counselor, contact The Village Family Service Center. 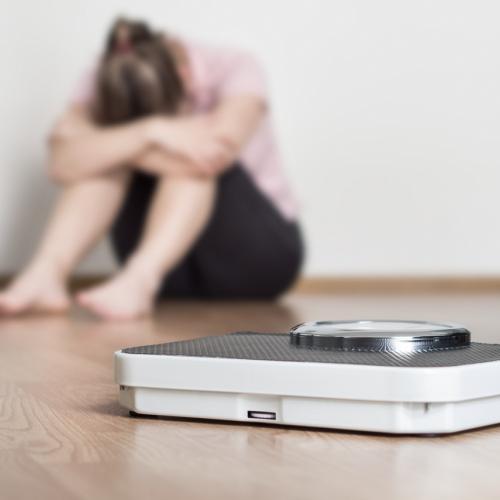 People who intentionally starve themselves suffer from an eating disorder called anorexia nervosa. The disorder, which usually begins in young people around the time of puberty, involves extreme weight loss – at least 15 percent below the individual's normal body weight. Many people with the disorder look emaciated but are convinced they are overweight. Sometimes they must be hospitalized to prevent starvation.

Deborah developed anorexia nervosa when she was 16. A rather shy, studious teenager, she tried hard to please everyone. She had an attractive appearance, but was slightly overweight. Like many teenage girls, she was interested in boys but concerned that she wasn't pretty enough to get their attention. When her father jokingly remarked that she would never get a date if she didn't take off some weight, she took him seriously and began to diet relentlessly – never believing she was thin enough even when she became extremely underweight.

Soon after the pounds started dropping off, Deborah's menstrual periods stopped. As anorexia tightened its grip, she became obsessed with dieting and food and developed strange eating rituals. Every day she weighed all the food she would eat on a kitchen scale, cutting solids into minuscule pieces and precisely measuring liquids. She would then put her daily ration in small containers, lining them up in neat rows. She also exercised compulsively, even after she weakened and became faint. She never took an elevator if she could walk up steps.

No one was able to convince Deborah that she was in danger. Finally, her doctor insisted that she be hospitalized and carefully monitored for treatment of her illness. While in the hospital, she secretly continued her exercise regimen in the bathroom, doing strenuous routines of sit-ups and knee-bends. It took several hospitalizations and a good deal of individual and family outpatient therapy for Deborah to face and solve her problems.

Deborah's case is not unusual. People with anorexia typically starve themselves, even though they suffer terribly from hunger pains. One of the most frightening aspects of the disorder is that people with anorexia continue to think they are overweight even when they are bone-thin. For reasons not yet understood, they become terrified of gaining any weight.

Food and weight become obsessions. For some, the compulsiveness shows up in strange eating rituals or the refusal to eat in front of others. It is not uncommon for people with anorexia to collect recipes and prepare gourmet feasts for family and friends, but not partake in the meals themselves. Like Deborah, they may adhere to strict exercise routines to keep off weight. Loss of monthly menstrual periods is typical in women with the disorder. Men with anorexia often become impotent.

People with bulimia nervosa consume large amounts of food and then rid their bodies of the excess calories by vomiting, abusing laxatives or diuretics, taking enemas, or exercising obsessively. Some use a combination of all these forms of purging. Because many individuals with bulimia "binge and purge" in secret and maintain normal or above normal body weight, they can often successfully hide their problem from others for years.

Lisa developed bulimia nervosa at age 18. Her strange eating behavior began when she started to diet. She dieted and exercised to lose weight, but regularly ate huge amounts of food and maintained her normal weight by forcing herself to vomit. Lisa often felt like an emotional powder keg – angry, frightened, and depressed.

Unable to understand her own behavior, she thought no one else would either. She felt isolated and lonely. Typically, when things were not going well, she would be overcome with an uncontrollable desire for sweets. She would eat pounds of candy and cake at a time, and often not stop until she was exhausted or in severe pain. Then, overwhelmed with guilt and disgust, she would make herself vomit.

Her eating habits so embarrassed her that she kept them secret until, depressed by her mounting problems, she attempted suicide. Fortunately, she didn't succeed. While recuperating in the hospital, she was referred to an eating disorders clinic where she became involved in group therapy. There she received medications to treat the illness, and the understanding and help she so desperately needed from others who had the same problem.

Family, friends, and physicians may have difficulty detecting bulimia in someone they know. Many individuals with the disorder remain at normal body weight or above because of their frequent binges and purges, which can range from once or twice a week to several times a day. Dieting heavily between episodes of binging and purging is also common. Eventually, half of those with anorexia will develop bulimia.

As with anorexia, bulimia typically begins during adolescence. The condition occurs most often in women but is also found in men. Many individuals with bulimia, ashamed of their strange habits, do not seek help until they reach their 30s or 40s. By this time, their eating behavior is deeply ingrained and more difficult to change.

Individuals with binge eating disorder feel that they lose control of themselves when eating. They eat large quantities of food and do not stop until they are uncomfortably full. Usually, they have more difficulty losing weight and keeping it off than do people with other serious weight problems. Most people with the disorder are obese and have a history of weight fluctuations.